The Episcopal Church of Saint Paul in the Desert traces its roots to the very early days of Palm Springs, going as far back as 1929.

It was around then that the village began to see an influx of Hollywood film personalities, world dignitaries and other celebrities, all heading to the desert oasis to play in the sun and partake of the natural mineral hot springs and warm climate – thought by many to have restorative and curative qualities. Many of these visitors stayed to establish full- or part-time residency, and the community continued to grow. This continuing immigration included a budding population of Episcopalians. 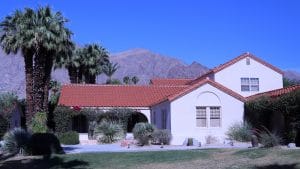 In 1930, the Palm Springs Community Church graciously offered the use of their facilities to these early desert Episcopalians and church services were launched, conducted by a chaplain from San Pedro. By November of 1938, the name “Saint Paul in the Desert” was officially established, naming the parish after Saint Paul the Hermit, sometimes known as Saint Paul of Thebes (228 – 341 A.D.), who by legend, was the first of the Desert Fathers of the ancient church. This early group of monks spent their lives in solitary meditation and prayer, establishing a legacy of kindness, selflessness and humility. See St Paul the Hermit.

That same year, land adjoining the parish campus was purchased, where, in 1949, ground was broken for construction of the parish hall. Upon completion, the hall was named in honor of the Rev. Robert M. Hogarth, the first rector (from 1941 to 1952). In 1960, additional, neighboring property was purchased from the Kline family. The structure was known as Blondon House, being named in honor of the second rector, the Rev. William A. Blondon, Jr. (1952 – 1959). This building now houses the church offices and library.

Over the years there have been other additions and remodeling endeavors. In the 1970s, translucent church windows along the aisles and clerestory were replaced with stained, faceted glass, designed and produced by the internationally acclaimed Judson Studios of Los Angeles. In 1977, the sacristy was added. The 1980s brought the addition of another adjoining piece of land and the purchase of an off-site rectory. 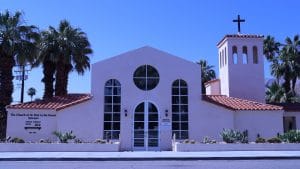 A complete renovation and expansion of the church property began in early 1994, managed by a parishioner-led Building Committee, with oversight from the Rector, the Rev. Andrew Green (1988 – 2019). The project was completed in March, 1996. (The first Sunday services in the new church building were held on March 17, 1996). On March 31, 1996 the Rt. Rev. Gethin B. Hughes dedicated the enlarged Sanctuary, Columbarium and Ministry Center. This event was the joyful conclusion of three years of prayer, planning, and building. The enlarged Sanctuary comfortably seats over 400 people.

St. Paul’s congregation grew with the enlarged church facility, and parish ministries continued to expand, as well. Today, these focused ministries include Altar Guild, Social Justice, Family & Children, Lector, Choir, Eucharistic Visitor, Hospitality, Stewardship and a variety of others. The Adult Faith Building education ministry functions throughout the year through a series of discussions and presentations, twice weekly. Parishioners have the opportunity to participate fully, as they choose.

The Church of St. Paul in the Desert also believes in a social responsibility to the community. The church hosts a number of weekly 12-step programs and provides facilities for use by other community groups on a regular basis. Through partnerships with Roy’s Desert Resource Center, Well in the Desert and other local agencies, St. Paul’s is a committed participant in responding to the special needs of the poor and suffering in the Coachellla Valley.

The Church of Saint Paul in the Desert has also established two missions during its history. St. Margaret’s Episcopal Church in Palm Desert was established in 1964. And in 1987, St. Anthony of the Desert in Desert Hot Springs was granted mission status and was consecrated in October of 1993.

In 2014, both the City of Palm Springs and the Church of St. Paul in the Desert celebrated the 75th anniversary of their founding. To honor and mark the occasion of the church’s 75th anniversary, the Rev. Robert Semes researched, wrote and published a history of the church’s first 75 years, A Church Grows in the Desert: A History of the Episcopal Church of St. Paul in the Desert, 1939-2014. It can be purchased in the church office. The parish looks forward to continuing its role as a vital, loving member of the community throughout the next 75 years, and beyond.