For over ninety years, Episcopalians have worshipped in Palm Springs.

A review of that time reveals four themes that help define where we’ve been as a Christian community. As our parish life continues, we expect the past to be both an example and a guide to our future.

Welcome to the Visitor – The first Episcopal services began in 1929 when a priest from Hollywood, California came to the desert for recuperative health and was invited to say Mass. Over subsequent decades, Palm Springs became a winter haven for many people and these part-time residents became vital to development of the parish. During the war years, guest singers for Christmas services were often professional entertainers employed by local hotels during “the season.” In 1957, actress Elizabeth Taylor brought her two children to the Church of St. Paul in the Desert for baptism. By 1961, the parish was ministering to over a thousand worshippers in the winter – far more than its full-time membership. In 1964, St. Paul in the Desert welcomed President Lyndon Johnson and First Lady Johnson for worship, joined by part-time resident J. C. Penney. Over the decades, the parish has continued to welcome visitors and newcomers from all walks of life. 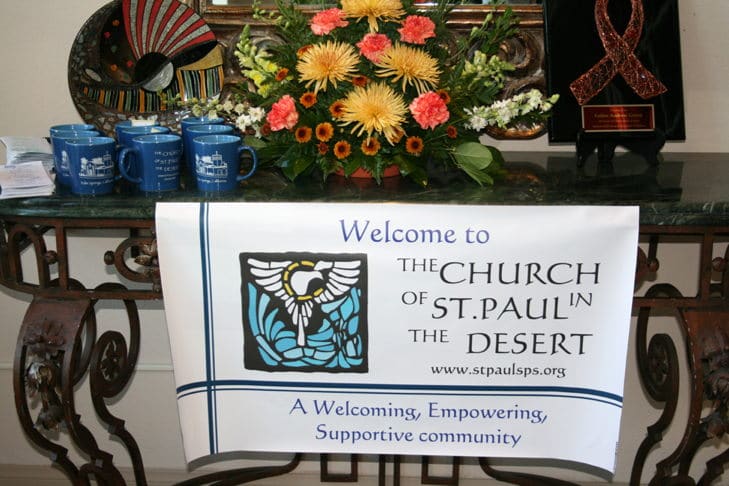 Service to the Community – Church of St. Paul in the Desert has a long history of active service to the community. One of the parish community’s earliest acts was to raise funds to support the Palm Springs Community Hospital in 1945. By 1964, enough residents in Palm Springs had become full-time that St. Paul’s began a regular year-round worship schedule. In 1982, the Vestry agreed to provide office space for Rev. Jack L. Cowan, PhD. to open the Episcopal Counseling Ministry. Later in 1985, the parish community embraced a growing number of “latch key” children who enjoyed St. Paul’s after-school spirit-based activities while their parents were at work. In the early 1990s, the AIDS epidemic impacted many parts of the world including the LGBT community in Palm Springs. Rev. Andrew Green, Rector at the time, saw the need to minister to this community and began a special healing service for victims of the disease. This began a legacy of outreach to the LGBT community, including a long, close alliance with the Desert AIDS Project. In 1997, St Paul’s Rector was called to impact the quality of local education and elected to the Palm Springs Unified School District Governing Board. 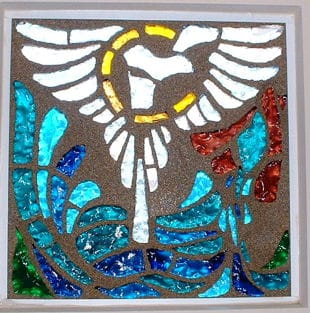 Responsible Stewardship – St. Paul in the Desert has been a careful yet forward-thinking steward of its resources. Women led the way in 1938 when they organized the church’s first fund-raising efforts. They later helped purchase war bonds in the 1940s and constructed the original church in 1943 with no debt. Three years later, the Los Angeles Diocese elevated St. Paul’s from mission status to a self-sustaining parish. In 1948, St. Paul’s continued to expand with construction of a new Sunday School building, remodeling of the Parish Hall (“Hogarth Hall”) and paid off the mortgage in 1957. Growth in the Coachella Valley spurred St. Paul’s to establish two mission churches: St. Margaret’s in Palm Desert (1963) and St. Anthony’s in Desert Hot Springs (1985). St. Paul’s purchased additional land with donations (1959 and 1984) and completed a major renovation of the campus in 1996 with the debt retired in 1998. Today, St. Paul in the Desert is debt-free.

Engagement with the Larger World – In past years, St. Paul in the Desert has supported missionary work in Honduras, supported the civil rights movement and worked to realize a fully inclusive parish, including recognition of same sex unions. Today, our parish provides financial support to St. Luke’s mission in San Diego.

We assist Well in the Desert, an organization that has programs for poverty prevention and intervention. We provide our kitchen for ongoing meal preparation and our parish hall for weekly meal service. Our parish campus provides meeting space for several community organizations such as AA and NA. During the COVID-19 pandemic, we continue to host Well in the Desert’s meal program and have also formed St. Paul’s Angels to assist impacted parish members with shopping and other needs.

The Church Community Today – The faith community of the Church of St. Paul in the Desert originates from Palm Springs and the surrounding area. Annual membership has decreased over the last three years.

The St. Paul community followed many others in the Episcopal Church in opposing ordination of a lesbian priest in New York. However, by 2000 our community was more open to discussing blessing same-sex unions, and in 2010 the community recognized same-sex unions.

St. Paul’s is over 80 years old and strives to remain relevant, contemporary and true to Christ’s Word and the Episcopal tradition. We commit our faith community to the Eucharist as the center of our worship and church life. From the altar, we go out into the world engaged in ministry and mission. We thrive on motivational sermons.

Parishioners expect the clergy, staff and congregants to perform meaningful acts as Christ has exhorted us. He told his apostles, “They will know you are my disciples by the love you show to another.” The St. Paul in the Desert community manifests Christ’s teachings through our mission statement, “serving Christ in others” and through our worship, prayer and actions.